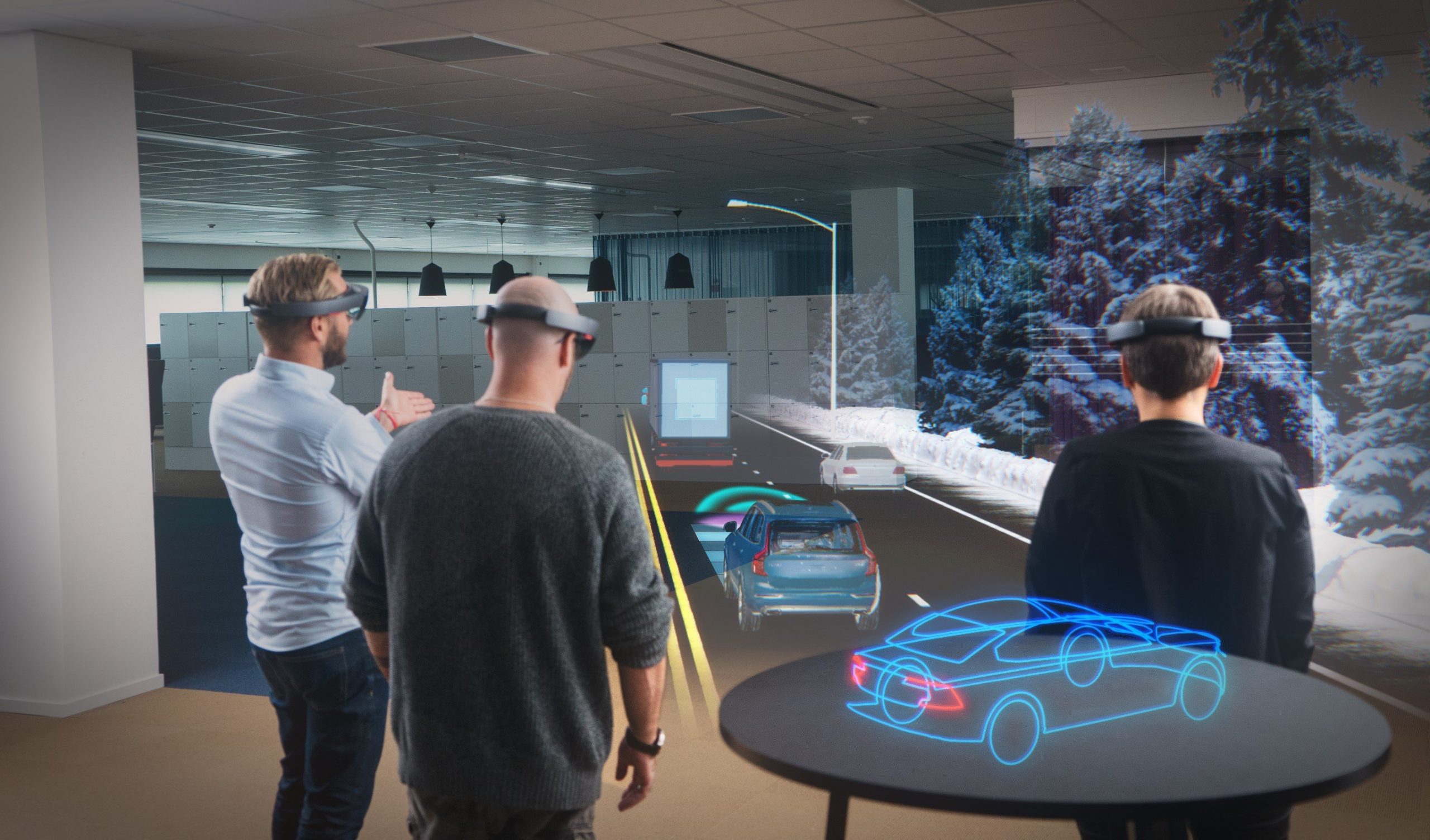 Microsoft HoloLens and Mixed Reality in 2018. Can It Help Replace a Dead Bulb?

It happens to every one of us. Whether it’s a dead turn signal bulb in your car, a lock that needs replacing, or a blown fuse. Things break. But not every one of us knows how to mend them, even if it only requires the most basic set of tools.

In this case, you’d typically ask your partner, parent, friend or a neighbor for a favor, but it isn’t always possible. And raise your hand if you ever felt ashamed to call a repairman just to fix some minor stuff like that.

Luckily, Microsoft claims to have developed a solution for that. It’s called HoloLens.

You have probably heard about Virtual Reality (VR), and possibly about Augmented Reality (AR) too. Now, Microsoft wants you to meet Mixed Reality (MR). The new solution for bringing virtuality into our world.

But how is it different from VR and AR? Let’s compare the three.

VR is the most widespread technology of them all. In the vast majority of instances, it utilizes head-mounted devices, like Oculus Rift, to display virtual images. What’s characteristic for VR is the full immersion.

The images displayed in Virtual Reality can (but don’t have to) simulate the real world. Users can move and interact with presented objects, but all their actions occur in the virtual world, and once they put their goggles on, they’re pretty much cut off from reality.

AR, on the other hand, is the least immersive of the three. You can explore Augmented Reality with just your smartphone. In AR, virtual objects are projected onto the real world, but they can only be seen with the device. You can’t really interact with those objects.

Take a look how IKEA took advantage of the technology with their AR-based IKEA PLACE app:

Now, to the newest technology of the three. Mixed Reality can be called a combination of VR and AR, as it blends virtual world with the real one.

Like it is the case with AR, in Mixed Reality images are projected onto the real world. But unlike AR, they can be interacted with. This, however, comes at the price of wearing a head-mounted device.

The most popular device for Mixed Reality is…you guessed it, Microsoft HoloLens.

Microsoft HoloLens. A Virtual Enhancement of Your Real World 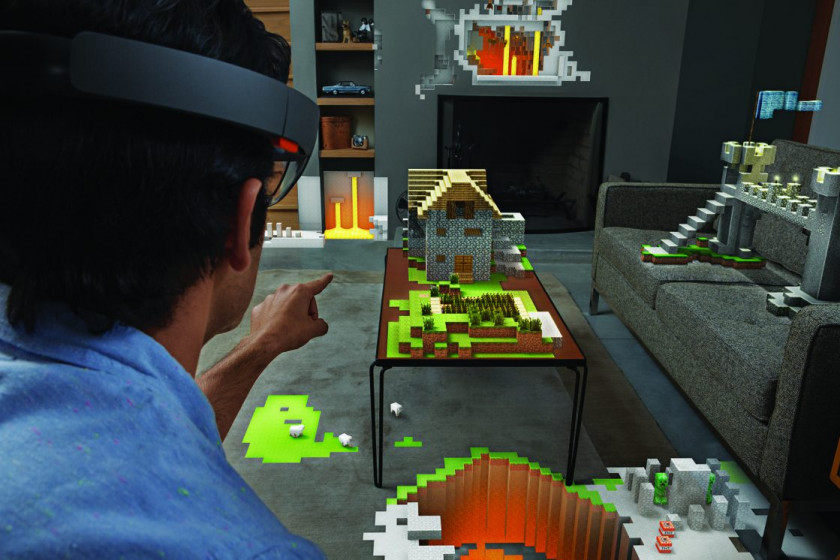 Mixed Reality, for the time being, can be experienced either with HoloLens or Windows Mixed Reality headsets developed by companies like Acer or HP. The difference between HoloLens and other MR devices is quite significant though.

What separates Microsoft’s device are the glasses that you can see through. HoloLens still utilizes a camera to scan your surroundings, but wearing the device doesn’t fully immerse you in the Mixed Reality world.

With other MR devices, you rely solely on cameras and a display, so the experience resembles the one known from VR.

Do you want to dig deeper into the technology?

So what exactly is HoloLens, and how does it work?

Let’s get over the technicalities first. HoloLens operates on Windows Mixed Reality system, has 2 gigs of RAM and 1 GB of HPU (Holographic Processing Unit) RAM. It is equipped with a 2.3 megapixel stereoscopic display and a 2.4 MP camera. Finally, it is capable of storing 64 GB of apps.

HoloLens produces holographic images right before your eyes. The best part, however, is that thanks to the camera scanning your environment, it’s actually aware of it, so the objects can be interacted with, and are projected onto areas that make sense.

Long story short, with Microsoft HoloLens, virtual elements get anchored in the real world, and you won’t break your neck tripping on a backpack trying to interact with them, because you’re wearing translucent glasses.

It just so happens that recently Microsoft expanded HoloLens availability to 29 more markets.

Like AR and VR, Mixed Reality serves as an innovative platform for gamers. Given Microsoft’s experience and investment in the Kinect technology, known from Xbox consoles, it’s quite reassuring that gaming on HoloLens could be good. Let’s take a look at a couple of examples.

Minecraft was one of the first gaming instances on HoloLens. Back in 2015, Microsoft showed us how you could erect a whole Minecraft world on top of your coffee table in the living room.

A better example of a game for HoloLens, however, is called Fragments.

Fragments is a first-person crime thriller. Not only does it turn your room into a crime scene but also makes you the protagonist trying to solve a case.

Don’t worry, though, you will have some detectives to help you out. Or, to be specific, life-sized holograms of detectives. What’s really amazing, is that the HoloLens camera lets the game scale to your room, and makes the characters aware of the surroundings, so they won’t leave you alone on the battlefield by escaping through the walls. Quite the opposite, they will, for example, chill on your sofa.

But gaming is only the tip of the iceberg, when it comes to Mixed Reality.

Renault gives us a great HoloLens use case for the manufacturing industry. Holographic images and instructions are utilized by the French automotive company in their Quality Assurance processes.

HoloLens makes it significantly easier to stick to the process, and maintain the required attention to detail, because of the notifications displayed next to each element that is being controlled.

Mixed Reality can also be of help in the education sector. Why would you want to read about some of historical, distant places, if you can just as well take a quick, virtual tour?

That’s what the HoloTour app was invented for.

But what about our dead turn signal bulb? 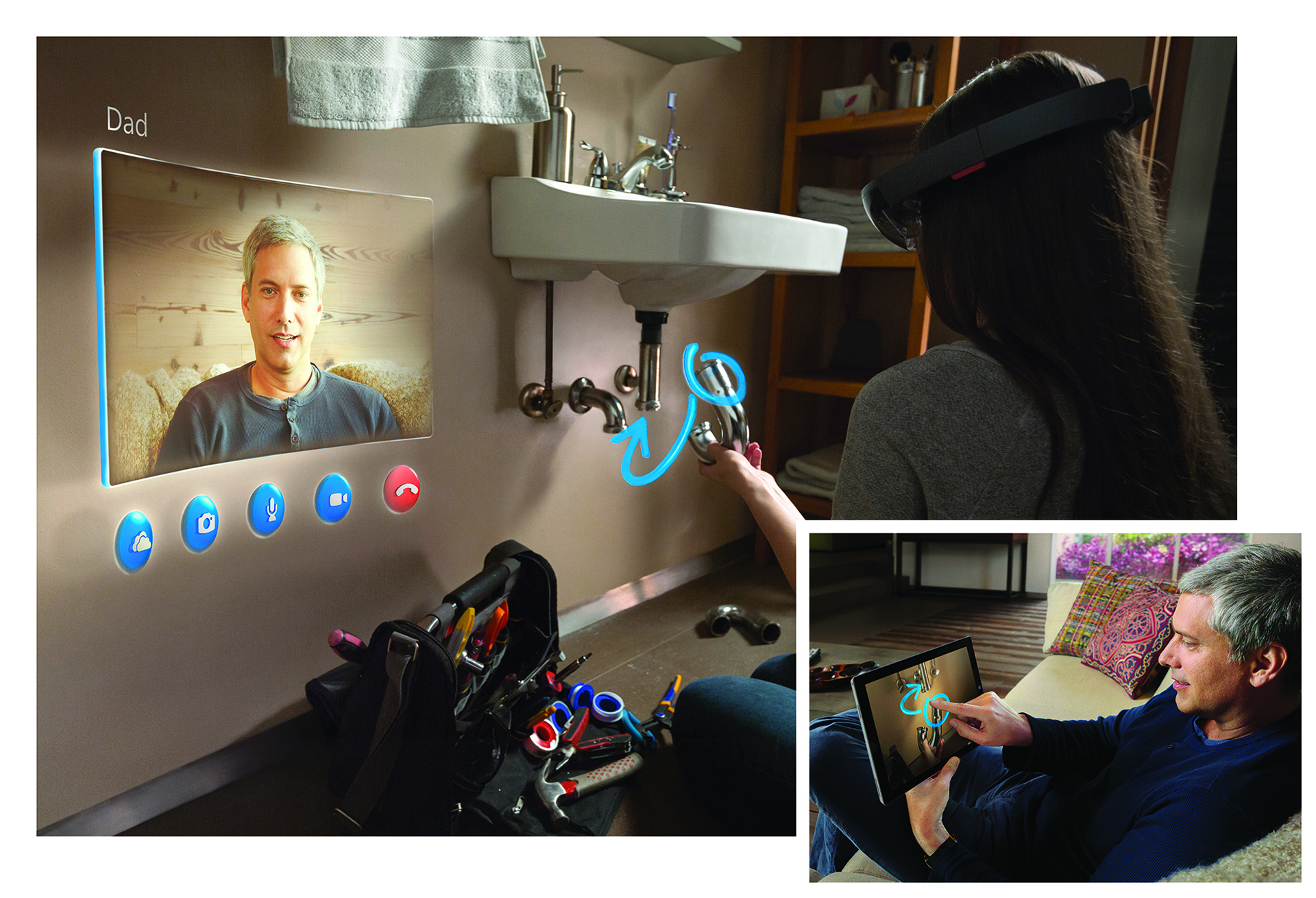 How is HoloLens going to help us with replacing it?

Skype for HoloLens was invented to be a groundbreaking communication tool that lets other see through your eyes and even doodle on what you see.

This turns out to be a tremendous solution for anything that you’d require instructions to fix.

What’s interesting, is that it looks like we’re getting closer to be able to have real-time holograms of our relatives in our rooms. Imagine that!

Where Are We Headed, Mixed Reality?

Let me make it clear. Playing Fragments on HoloLens, you’re not going to be reenacting Minority Report, swiping through the holograms of the future.

We’re not there yet. We still need to wear a device on our heads to see any of that, and it’s only the wearer who’s seeing the holograms. A large part of Mixed Reality’s potential is still yet to be explored, and there’s still plenty of development to do.

And if you think about the potential, Mixed Reality could very well reinvent medicine, the military or basically any other area where tough decisions have to be made by individuals in a hurry.

But given the fact, that HoloLens has only been released to developers in 2016, there’s still a lot of faith that Microsoft’s device can be the next big thing.

HoloLens is already being utilized in medicine to teach students, in manufacturing to improve processes, and in education to make palpable what’s always been just a theory.

And if you think about the potential, Mixed Reality could very well reinvent medicine, the military or basically any other area where tough decisions have to be made by individuals in a hurry.

Microsoft’s dedication and nearly unlimited investment in this project, tell us that HoloLens and Mixed Reality should not only out-popularize other Cross Reality technologies but also become a meaningful tool for consumers and industries.

Say “Hi” and start a Mixed Reality project with us.